Skip to content
Home » Subdomain vs. Subfolder, Is One Better Than the Other for SEO?

Let’s look at why SEOs argue over this topic and how it really works.

Is a subdomain or subfolder better for SEO?

SEOs have argued about this for as long as I can remember. Many SEOs say that subfolders are better for SEO and insist on using them. This is a myth that’s persisted based on some old studies.

Google has repeatedly said either is fine.

Google websearch is fine with using either subdomains or subdirectories. Making changes to a site’s URL structure tends to take a bit of time to settle down in search so I recommend picking a setup that you can keep for longer.

I don’t think they could make it any clearer, but some SEOs still argue with Google. I love John’s sarcastic response to these arguments.

What reason could Google possibly have to be misleading here? “We’re running low on subdirectory-servers”? I knew this would trigger some folks, so I spent time to prod folks internally about the reality, and there’s nothing to hide here.

It’s silly to argue if a path is better on the left or the right. Without going into too much technical detail, these paths are virtual in most modern systems, which means they don’t even point to actual locations on a server. You can change their name and their location in the URL structure in a matter of minutes.

Think about that for a second; you can change a subdomain to be served as a subfolder quickly and without changing anything else, so why do people think it’s important where the path is located in the URL?

A little history lesson. At one time, subdomains could get you additional listings in the SERPs. As with many things, SEOs abused this. Google closed this loophole in one of the old domain/host clustering updates. 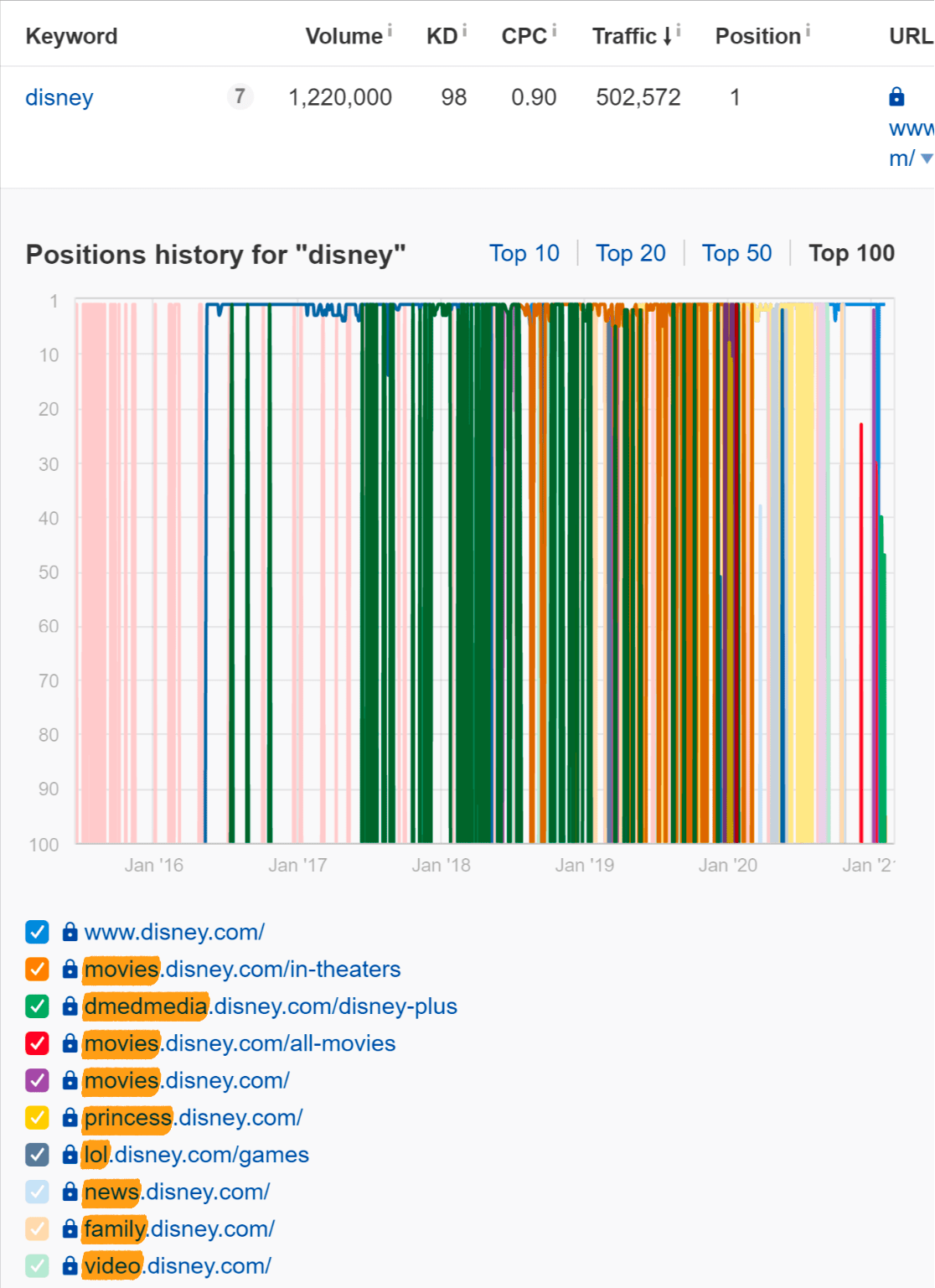 Various Disney subdomains that have shown as sitelinks. Data from Ahrefs’ Site Explorer.

I can give you countless examples where various subdomains show as sitelinks for the brand—Github, LinkedIn, Google, Amazon, Microsoft, Yahoo, Netflix, Walmart, etc.

Many case studies show subfolders are better than subdomains, but I haven’t seen one that wasn’t complicated by other changes like additional internal linking or migrating multiple properties into one.

Let’s look at one of those case studies and what I see. Using Top Pages 2.0 in Site Explorer, you can click and drag on the history chart to see the difference between any two dates. In the case of mention.com, they migrated from a subdomain to a subdirectory in January 2016. I really don’t see any difference in that period. It’s only after that when they started adding additional content that I see their traffic growing.

And notice that an equivalent page for each page that lost traffic re-gained around the same amount of traffic. The traffic simply shifted to a new location, but there was no real increase.

Here’s another fun one. Github migrated from a subfolder (github.com/blog) to a subdomain (blog.github.com) and then to a completely different domain (github.blog). There was some flux during the migration periods, and there were other changes during the transition, but it would be hard to argue that any one of these was better than the others simply because of the URL.

Several different issues may cause people to believe that migrations had more or less impact than they really did.

When pages are new or moved, Google may have them inherit some temporary signals at a folder or site level because they’re not quite sure how much to crawl or how to rank them yet. This can cause some temporary fluctuations while they figure out the changes.

This can show up in many different forms. It might be analytics setup issues such as maybe subdomain tracking wasn’t set up correctly. It can be timing issues such as measuring growth during a fast season, such as holiday shopping vs. an average traffic period, or around a Google core update. It can only be looking at growth in the new folder. The main thing is to make sure that you’re comparing apples to apples.

If you block pages from being crawled or noindex pages, signals won’t consolidate correctly, which means you’re likely to see a drop during the migration. I’d recommend reading our robots.txt guide to understand this better.

A lot of different things can change when you redesign a website or change the platform. Technology, speed, headings, URL changes, and more can all be different.

I see this one often in subdomain vs. subfolder case studies: Going from a separate subdomain that wasn’t linked internally to a subfolder that’s linked to on every page. Of course there’s going to be an uplift.

Changing content means ranking and traffic are likely to change. If you remove content that had traffic, then traffic drops.

Changes introduce risk. You might want to think twice before changing from a subdomain to a subfolder if the only reason you’re doing it is for SEO.

If you have a case where you migrated and saw an uplift without any of the changes above, I’d love to see it. Send me a message on Twitter, and I’ll investigate, but I’m willing to bet there is a change that can explain the difference.

I often recommend resources some of which pay me an affiliate commission at no cost to you. These commissions help me to maintain this site free of charge to my visitors.

We use cookies on our website to give you the most relevant experience by remembering your preferences and repeat visits. By clicking “Accept”, you consent to the use of ALL the cookies.
Do not sell my personal information.
Cookie SettingsAccept
Manage consent

This website uses cookies to improve your experience while you navigate through the website. Out of these, the cookies that are categorized as necessary are stored on your browser as they are essential for the working of basic functionalities of the website. We also use third-party cookies that help us analyze and understand how you use this website. These cookies will be stored in your browser only with your consent. You also have the option to opt-out of these cookies. But opting out of some of these cookies may affect your browsing experience.
Necessary Always Enabled
Necessary cookies are absolutely essential for the website to function properly. These cookies ensure basic functionalities and security features of the website, anonymously.
Functional
Functional cookies help to perform certain functionalities like sharing the content of the website on social media platforms, collect feedbacks, and other third-party features.
Performance
Performance cookies are used to understand and analyze the key performance indexes of the website which helps in delivering a better user experience for the visitors.
Analytics
Analytical cookies are used to understand how visitors interact with the website. These cookies help provide information on metrics the number of visitors, bounce rate, traffic source, etc.
Advertisement
Advertisement cookies are used to provide visitors with relevant ads and marketing campaigns. These cookies track visitors across websites and collect information to provide customized ads.
Others
Other uncategorized cookies are those that are being analyzed and have not been classified into a category as yet.
SAVE & ACCEPT
WP Twitter Auto Publish Powered By : XYZScripts.com